Situated on the Clyde River about 10 kms upstream from Batemans Bay, the history of the village of Nelligen is closely linked with this beautiful waterway.

In the early days, Nelligen was the end of the line in the sense that all commerce and goods from the hinterland made their way to the town from where they were loaded onto ships for the ensuing sea journey to Sydney and more distant destinations.

Conversely, trade to the Southern Tablelands or people wishing to travel to that region used Nelligen as the final staging place from where they could ascend the escarpment to their destinations. In those days, Nelligen was a busy trade and commercial centre and much larger than it is today.

The barrier to the coast formed by the Clyde River, which is in its wide, estuarine state here, was finally breached in the 1960's with the construction of a bridge, which then linked the road from the Southern Highlands to the Princes Highway and (by way of the recently constructed Clyde River bridge on the highway) to Batemans Bay.

After that, the commercial centre for the region gradually drifted to Batemans Bay which has now grown to be the largest town on the coast south of Nowra.

Today, Nelligen is a peaceful village enjoying a rest from its bustling past. It is popular with local people and visitors for the beauty and recreational facilities enjoyed on the river at this point. The long, wide reaches of the river are popular for water skiing, fishing and boating. You can rent a houseboat here to enjoy a peaceful holiday right on one of the most beautiful rivers in the state. 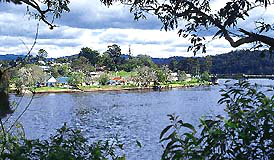 Nelligen on the Clyde

Yet you can still find reminders of the pioneer days, including the gold rush which briefly visited the region in the nineteenth century.

There are a number of choices of accommodation available in the town, ranging from camping to more upmarket accommodation at the well known Steampacket Hotel or at some of the historic and renovated Nelligen guesthouses.