Situated on the banks of the beautiful Moruya River, Moruya is a country town in the traditional style with an easy, relaxed lifestyle far removed from the pace of city life. Moruya has been a rural and commercial centre. You will see a number of historic buildings as you pass through the main streets of the town, the preservation and restoration of which gives Moruya its special character on the Eurobodalla Coast.

Although being the smallest of the three major towns on the Eurobodalla Coast, Moruya is the administrative centre of the shire - home to the council offices and other public institutions, such as the Moruya College of TAFE. The historical selection of Moruya for these institutions arises partly from the fact that Moruya lies near the geographical centre of the Eurobodalla Shire, which runs from Batemans Bay in the north to Tilba in the south and also because Moruya is one of the older towns in the region.

Located inland from the coast, Moruya is well placed to use as a base from which visits to other points of interest can be undertaken. Moruya Heads, for example, is only about 10 kms to the east and boasts beautiful views north along the coast and west over the estuary of the Moruya River, called the Deua in its upper reaches, to the spectacular mountains of the Eastern Escarpment. Here at Moruya Heads is also a great surfing beach which is patrolled in summer. There are many other unspoiled beaches, Congo, Bingi and some others without names, that are within a short drive from Moruya. 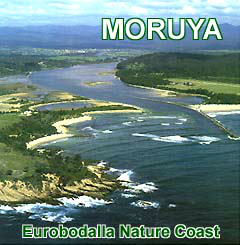 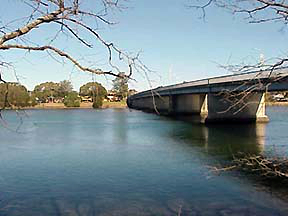 Across the Moruya River

From Moruya, it is only a short drive to one of the South Coast's special places at Tuross Head - a coastal paradise for holiday makers and fishermen. Also close to Moruya are the beautiful beaches and villages at Tomakin and Broulee to the north and Moruya Heads, Congo and Bingi to the south and east. 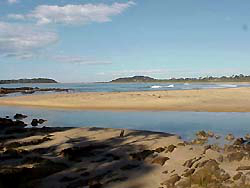 Moruya is also a good base for excursions to the Deua National Park, the largest in the South East region. Here, in the mountains and forests from which the Deua River springs, are reserves and wilderness areas that have remained in a pristine state and offer true satisfaction to the visitor seeking an escape from the pressures of city living. 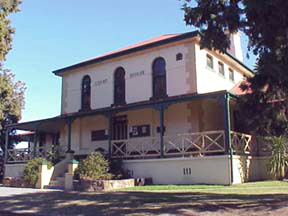 Accommodation alternatives range from caravan and camping grounds to hotels, motels and a few very welcoming guesthomes, while a variety of restaurants and cafes will cater for most tastes.

Moruya hosts country markets held on Saturday mornings in the centre of town. Here you can browse through a wide array of stalls offering arts, homemade crafts, clothes, food delicacies and much more. These authentic markets are colourful and famous, drawing visitors and locals alike from miles around.

Moruya is also popular for its annual rodeo which really gives a taste of country living in rural Australia.

Equally, this versatile town is renown for its Jazz Festival, which annually boasts an amazingly varied program with big-name jazz musicians playing in relaxed country venues.

Tourists in the town can take a historic bus tour which explores Moruya's fascinating past and you should not miss Australia's Bush Orchestra, Moruya's own and unique theme park.

Golfers are well catered for with a public course and a driving range nearby. You can enjoy bowling greens and tennis courts while the town also has a heated public swimming pool for your recreation. The fishing is also great from the river or from nearby beaches and lakes.

Whether as a destination or just passing through, we hope you visit Moruya soon.